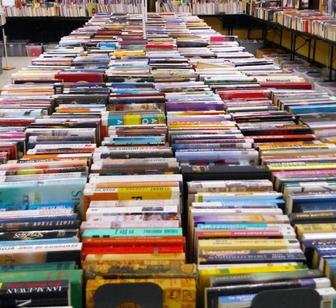 FFRPL’s sponsorship helps to cover the cost of bringing the featured speakers to the Library for readings, talks, and book-signings, which are offered to the public for free.

In 2021, we hosted a reading with botanist Robin Wall Kimmerer. Kimmerer’s acclaimed Braiding Sweetgrass: Indigenous Wisdom, Scientific Knowledge and the Teachings of Plants takes readers on “a journey that is every bit as mythic as it is scientific, as sacred as it is historical, as clever as it is wise” (Elizabeth Gilbert). Learn more about Robin Kimmerer here.

FFRPL was proud to sponsor Kimmerer’s visit to Central Library.

Kimmerer’s first book, Gathering Moss: A Natural and Cultural History of Mosses, was awarded the John Burroughs Medal for outstanding nature writing. Kimmerer lives in Syracuse, NY, where she is a SUNY Distinguished Teaching Professor of Environmental Biology and the founder and director of the Center for Native People and the Environment.

(Due to COVID restrictions, Rochester Reads 2020 was not held).

In 2019 we hosted an event with award-winning journalist Omar El Akkad, author of the critically acclaimed debut novel, American War. “El Akkad has written a novel that not only maps the harrowing effects of violence on one woman and her family, but also becomes a disturbing parable about the ruinous consequences of war on ordinary civilians.” – Michiko Kakutani, The New York Times.

In 2018 we hosted novelist and memoirist Reyna Grande (The Distance Between Us), who told stories of her immigration from Mexico to the U.S. as a child. “This heartrending and thoughtful memoir puts a human face on immigration’s personal toll.” – Kirkus Reviews

In 2017 we hosted Rene Denfeld, author of the critically acclaimed novel The Enchanted, which centers around a death row inmate.  “Evocative. . . . Denfeld’s humanizing of the potential for horror that is within all of us and her insistence that the reader see the beauty in the darkest corners of life sizzles through her sharp prose …” – Booklist

In 2016 we hosted author Sonja Livingston, author of Queen of the Fall, which explores the legacies of women Livingston crossed paths with in life and in the larger culture.

In 2015 we hosted Karen Thompson Walker for a talk about her NYT bestselling debut novel, The Age of Miracles. “Part speculative fiction, part coming-of-age story … The Age of Miracles could turn Walker into American literature’s next big thing.” – NPR

In 2014 we hosted Pulitzer Prize finalist Eowyn Ivey for a talk about her debut novel The Snow Child. Ivey’s book, The Snow Child is the story of a childless homesteading couple in 1920s Alaska. One night, they build a child out of snow, only to find it gone the next day, seemingly replaced by a wild and secretive little girl. “This book is as expansive as that great state, exploring such issues as personal isolation and communal survival, especially how we can triumph over adversity by working together as families, neighbors and friends,” says Karen vanMeenen, director of special projects at Writers & Books.